What is RD pattern?

Continuing from the last article, I will introduce another trend follow pattern in Woodies CCI.

This time, I will introduce a pattern called “RD” (Reverse Divergence) that uses the appearance of so-called “Hidden Divergence (or Reversal)”.

In my opinion, among many Woodies CCI patterns, I think this RD pattern is the most powerful, the most competitive and the most recommended. I think it would be good to concentrate on this pattern alone and study.

To understand RD strategy, it’s important to understand what “Hidden Divergence (Reversal)”‘ is and how it differs from normal divergence.

If you are new to Hidden Divergence, I’ll prepare another article within a few days.

The RD pattern is a pattern in which when the “Hidden Divergence (Reversal)” appears, a trend line is drawn on the CCI line, and the entry is made when the CCI cross the trend line.

Please take a look at example chart below. 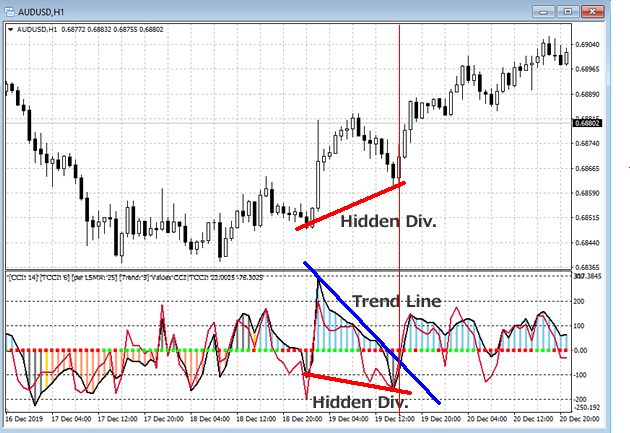 In the RD pattern, when Hidden Divergence appears, draw a trend line (blue line in the above figure) that connects the mountain of the CCI line (this is not a valley but a mountain), and when the CCI line crosses the trend line is entry timing (at the red vertical line in the figure above).

If you are new to divergence:
(Normal) divergence connects “mountain to mountain” for uptrends and “valley to valley” for downtrends. Hidden divergence, on the contrary, connects “valleys” with an uptrend and “mountains” with a downtrend
I think you should remember.

I prefer entry at the CCI ±100 line cross timing to entry at trend line cross timing. I think that you can often enter with one or two bars before the trend line cross. In that case, the loss cut line is closer and the risk reward is better. On the other hand, the probability of CCI deception will increase. As I wrote last time, to use CCI means a battle with deception. The key is how to avoid the deception and increase your advantage.
This is also my personal opinion.
Hidden divergence can itself be used with ordinary CCI and other oscillators (RSI, etc.). However, in Woodies CCI, other patterns (ZLR pattern which was introduced in last article or TLB pattern which will be introduced next time) may occur at the same time when this RD pattern can be used, so it is possible to enter at a timing with higher advantage.Even in the case of the above example chart, you can see ZLR pattern explained in the previous article occurred at the same time.

According to the official reference, it is possible to enter 20 seconds before the bar is confirmed, without waiting for the bar to be confirmed.
I’ll explain the timing of exiting in later article.

There is a strong correlation between the German-Italy bond yield spread and EURUSD (the opposite correlation). In long-term 10 years chart, ECB's strengthening of monetary easing was a major turning point in May 2014, and the Eurodollar has fallen sharply thereafter. Also, we compare Euro crisis in 2011 and COVID-19 shock in 2020.

How global stock indices fell in this week?

This week we had a risk-off market since US stock market fell on Thursday and Friday. You can see that the drop in NASDAQ market, which mainly consists of IT and high-tech sectors, is larger than other indices.

From the beginning of the year 2020, we can see that the order of currency strength is almost same order of grouping of "Current account is surplus or deficit" and "Resource country or not". However, we can see that AUD has outstanding performance. The Australian economy's trade surplus and current account surplus are expected to remain solid in the future as the Chinese economy recovers. Also, it has the highest policy interest rate of 0.25% among the advanced economies