As an example of TLB pattern, please see chart below. 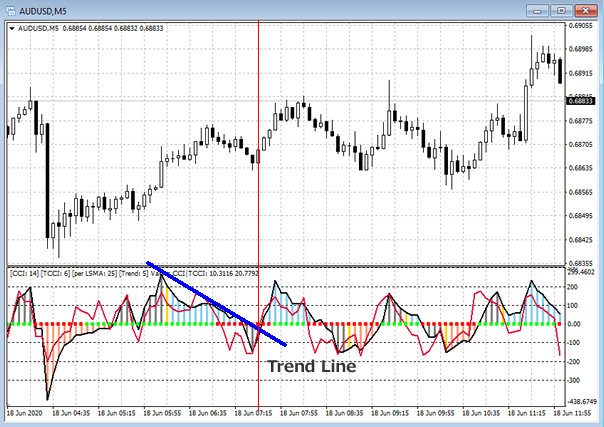 Entry timing is when the CCI line crosses the trend line (blue line) that connects the tops of the CCI line.
It is desirable to draw the trend line from a place as far as possible from the zero line (for example, over +/- 200 level).

In the case above, ZLR pattern also occurs at the same time. 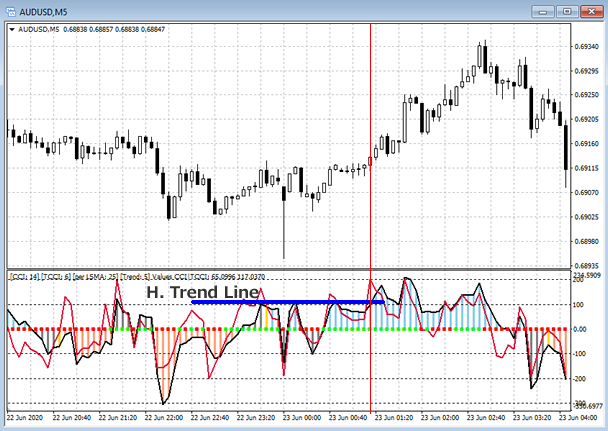 In my personal opinion, I think that single use of TLB pattern or HTLB pattern often results bad entry. As I introduced in the articles about RD (Reverse Divergence) pattern, I think it is better to use the TLB method in combination with RD pattern that use hidden divergence (which implies continuation of trend).

The method of drawing a trend line or horizontal line on an oscillator-based indicator is not limited to Woodies CCI, but is generally well introduced. Not only CCI but also other oscillators such as RSI can perform the same analysis.

According to the official commentary, it is possible to enter 20 seconds before the foot is confirmed, without waiting for the foot to be confirmed.

The timing of profit determination and loss cut will be explained in another article.

So far, we have introduced four patterns for entry as trend follow (ZLR, RD, TLB, HTLB).
From the next article, we will introduce six patterns as entry as “counter-trend” which means entry in the opposite direction to the trend.

Before that, I will explain here how to exit in the Woodies CCI patterns. Regarding the exiting, the official reference mentions following methods.

The official reference specifically introduces three of them (* above). 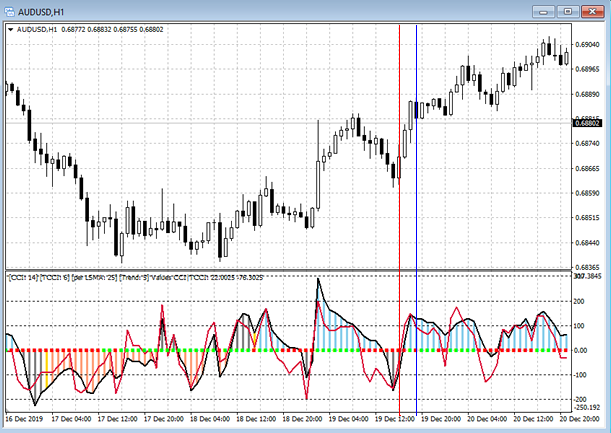 Exiting by TCCI crossing into the CCI 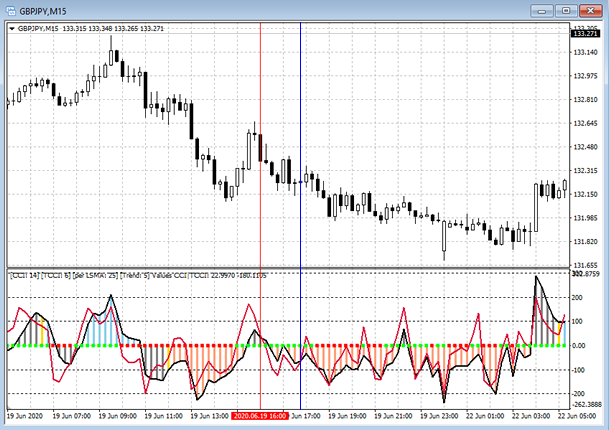 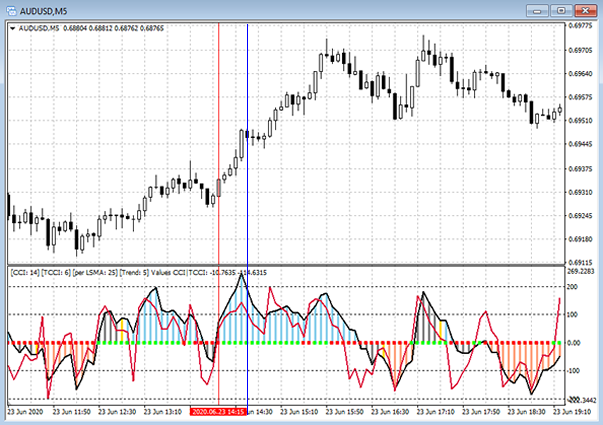 In addition, “Hook from Extremes (HFE)” will be introduced as one of the patterns in later article. At this point, please recognize is as a reversal from the top of the over +/- 200 level.

You might think that all of the above examples are too early as exiting timing. It is also realistic to exit using moving averages or other technical indicators.

The official reference does not explain in detail how to take profit and cut loss. It is necessary to establish your own trading style with regard to the method of profit taking, loss cut, and risk rewards setting.

From the next article, I will introduce the “counter trend method” in which entries are made in the opposite direction of the trend.

From the beginning of the year 2020, we can see that the order of currency strength is almost same order of grouping of "Current account is surplus or deficit" and "Resource country or not". However, we can see that AUD has outstanding performance. The Australian economy's trade surplus and current account surplus are expected to remain solid in the future as the Chinese economy recovers. Also, it has the highest policy interest rate of 0.25% among the advanced economies

In TradingView, there is a way to make this "fragment" of the trend line beautiful by making it invisible in unnecessary situations. In the tab "Visibility", you can set the time-fame for showing each drawing. By saving this visibility setting as a template, you do not have to set it each time you draw.

In September 2020, with the fall of US stocks from the beginning of the month, most currencies fell against USD, and it can be seen that the upward trend after the pandemic plunge was modulated and the adjustment phase continued. All currencies other than JPY have fallen against USD in last month. However, at the end of the month, there are signs of a reversal rise as US stock market reversal.
Sponsored links
Trade Idea (RSI, Woodies CCI, Divergence, GMMA) 2020-08-28
Woodies CCI – Strategy Analysis (5) Famir, Vegas, and Ghost trade pattern
Home
Resources