“Famir” is the name of Mr. Woodie’s friend, and the Famir pattern was named after the friend.

In addition, the official reference mentions that beginners should learn the trend follow pattern first and should not trade with counter trend patterns.

The Famia method is a counter trend pattern to use when the ZLR pattern which was introduced in the second article fails, in other words, when the trend changes as it is without returning to the original trend.

Please see the example chart below. 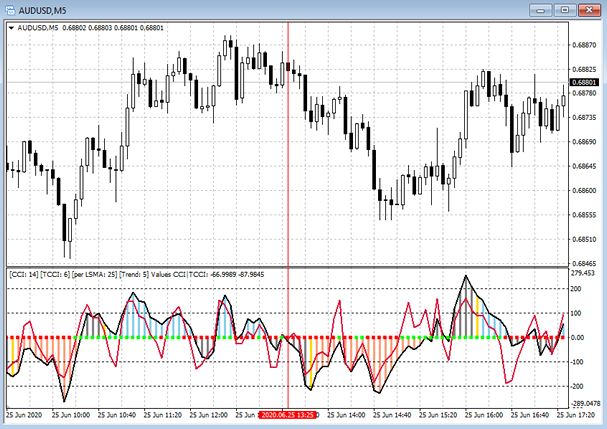 The official reference mentions that it is a pattern that is difficult for beginners to recognize, and it is necessary to feel it. It also mentions that because of the loss cut of the ZLR pattern by beginners, it has a high probability of success and is favored by many traders.

About this pattern, the momentum of the trend gradually weakens, and it is necessary to have experience to judge the price action and the timing at when the trend finally reverses.
In my opinion, I think that the success possibility will be enhanced by combining with the emergence of (regular) divergence (not hidden divergence), which implies a trend reversal. In above chart, we can see regular divergence appears.
This is also a personal opinion, but I think it’s better to wait until the bar is fixed as entry timing, not 20 seconds before the bar is fixed.

Next, I will introduce two patterns called “Vegas” and “Ghost” in counter trending patterns that enter in the opposite direction to the trend.

Both the Vegas pattern and the Ghost pattern use the characteristic as follows.
“Before the trend finally ends and the CCI moves toward the zero line, a small reversal movement that returns to the trend direction happen, and then a movement that moves in the opposite direction to the trend again”.

It’s hard to explain in the text, but you can see it in the chart below.

Please see the Vegas pattern example in the chart below. 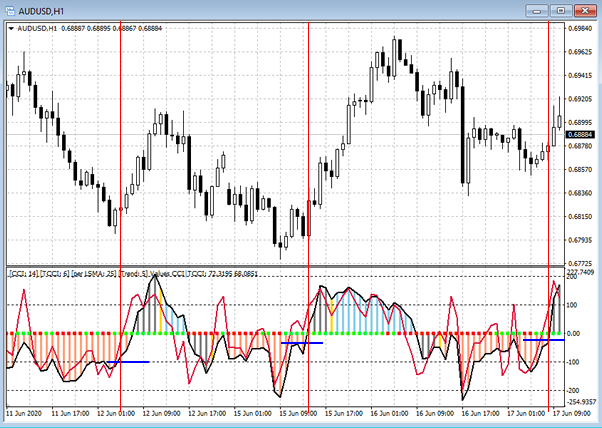 Please see the Ghost pattern example in the chart below. 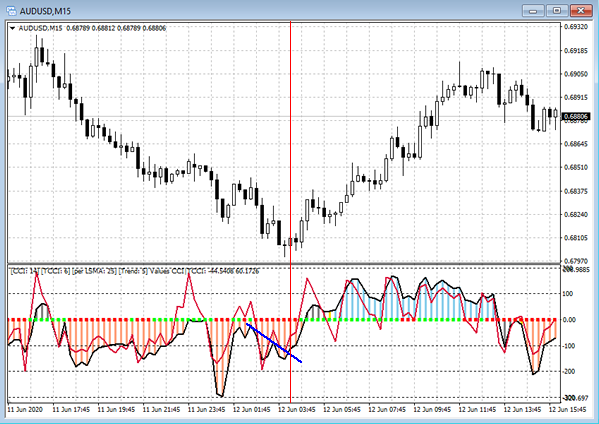 The red vertical line means the entry point for the Ghost pattern. You will enter when you cross the line (blue line in the above chart) that connects the two small tops (or small rallies). The Vegas method has one top (or rally) of CCI movement, and the Ghost method has two tops (or rallies).

The Vegas pattern and the Ghost pattern are the same, in the sense that they aim for a small pullback (dip and rally) before the trend approaches the end and finally reverse.
In the case of the Ghost pattern above, you have made a super excellent entry as a result (It is just a bottom!). I think it is difficult to judge this timing only with CCI movement. However, with the emergence of (regular) divergence (not hidden divergence) which implies trend reversal, it may be possible to judge that it is a point with a higher success rate.

In Woodies CCI patterns, The ZLR pattern is a strategy to focus on the timing in which the CCI line temporarily returns to the zero line direction opposite to the trend, or after crossing the zero line, to return to the original trend direction. It is an easy-to-understand strategy of "buy on dips" or "sell on rally".

Best forex indicators: CCI (2) How to Utilize Divergence of CCI