It is September from today.
In this article, I would like to make a relative comparison of currency strengths for the G10 currencies, which is a group of major currencies, by YTD (for the beginning of this year) and by MTD (for the month of August last month). 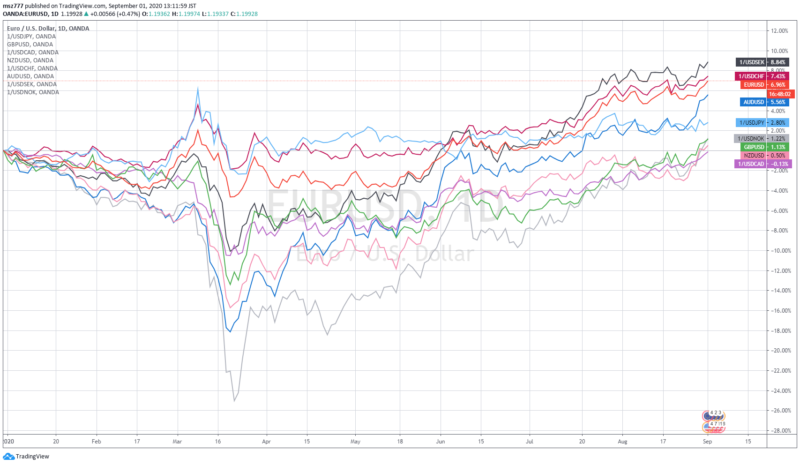 The strength and weakness of the currency seen from the beginning of the year 2020 from the strongest order is as follows.

When analyzing currency vulnerabilities, there is a method of using the categories of currencies such as “Current account surplus or deficit”, “Non-resource country or resource country”, and “G10 currency or other currency”.

Since we are only targeting G10 currencies in this article, there are two classification axes: “whether the current account is surplus or deficit,” and “whether it is a non-resource country or a resource country.” It can be divided into the following 4 groups. Group 1 is the most vulnerable currency and Group 4 is the most vulnerable currency. (However, all currencies of the G10 currency are stronger than the currencies of other developing countries.) 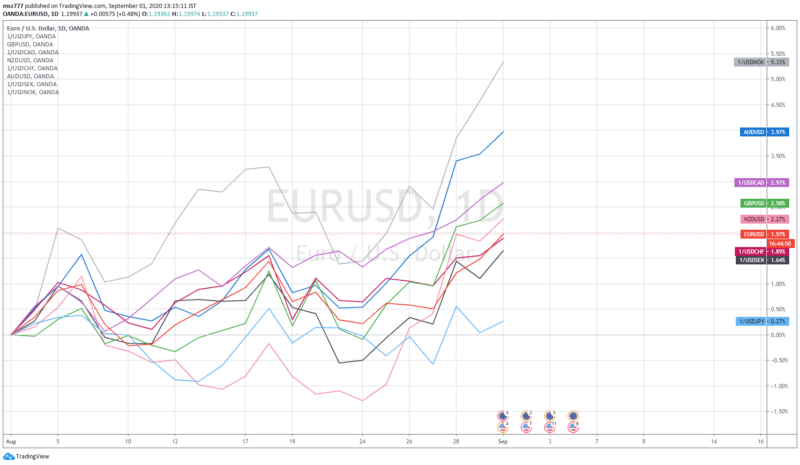 The strength and weakness of the currency seen from the beginning of August 2020 from the strongest order is as follows.

To compare with the YTD analysis mentioned above, NOK and the CAD showed strong performance in this month, mainly due to rising crude oil price. As for NOK, it was the weakest currency among the G10 currencies in pandemic turbulence, due to the crude oil price crash. After that the buyback of NOK from oversold is continuing.
The relative weakness of the CHF, JPY, and the SEK suggest that risk-on mood continued in August. EUR was the strongest currency in Group.1.

It can be said that USD has generally weakened against all major currencies, while AUD has remained strong since the beginning of this year.

AUD is likely to remain the fundamentally strongest currency for a while. The reasons are.

However, I think we need to be cautious about RBA’s warning comment against the strong AUD and expanding the second wave of the COVID-19. The RBA announced policy rate and statement today, but it seems to have passed safely.

"Woodies CCI" is a unique trading indicator and strategy based on two CCI lines with different periods. It was invented by Mr. Ken Wood. It is already internationally become popular. I would like to analyze several strategy using Woodies CCI. My analysis is divided into 6 articles. At first I will explain components of Woodies CCI and trend definition.

TradingView provides a unique scripting language called "Pine Script". This allows users to create their own original indicators (custom indicators) for analysis and trading as strategy. We introduce the first sample of custom indicator (MACD) created by Pine Script.

Guide of How to Create Custom Indicator by Pine Script (TradingView) 2. plot function

Continuing from the last article, this time I will explain the contents of the "plot function" as the basics of TradingView's original language "Pine Script". After explaining the plot function, I would like to add a MACD histogram for the MACD indicator created last time by using the detail settings of the plot function this time.