I’d like to write five articles about “Divergence” from now on.

“Divergence” in forex trading means a phenomenon in which the movement of prices and the movement of oscillator-based indicators go in reverse. Divergence originally means that if two lines or paths diverge, they separate and go in different directions (Longman English-English dictionary).

A basic forex textbook mentions that a divergence implies a reversal of the current trend. On the other hand, we sometimes hear the term of “Hidden divergence”.

Are you sure what “Hidden divergence” means?

There are two types of divergence, “Regular (or Classic) divergence” and “Hidden divergence”. In the chart below; 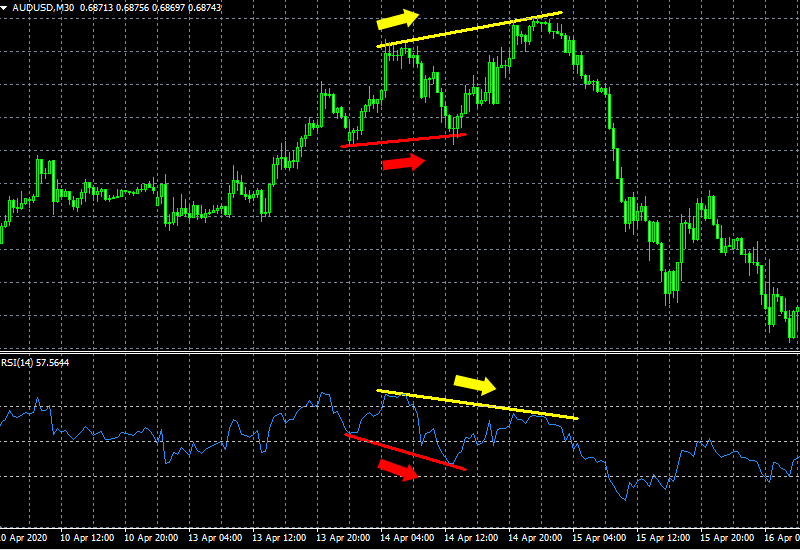 The “Regular divergence” (yellow line) is a line connecting two tops (“Higher High” and “Lower High”) during an uptrend, suggesting a reversal of the trend. This is familiar. On the other hand, the “Hidden divergence” (red line) is a line connecting two bottoms (“Higher Low” and “Lower Low”) during an uptrend, suggesting that the trend will continue. (On the contrary, when it is a downtrend, Regular divergence connects two bottoms and Hidden divergence connects two tops.)

In the chart above, the appearance of “Hidden divergence” has become a perfect “buy on dip” and a signal to continue the upward trend thereafter, and after that, “Regular divergence” appears and the trend finally reverses.

As in the chart above, “Hidden divergence” and “Regular divergence” may appear consecutively in one chart.

These divergences are not always signals that guarantee 100% continuity or reversal of trends. It is dangerous to trade only this for material. However, divergence is a very helpful factor when considering the superiority of trading, so there is no reason not to use it in trading.

The most important difference from viewpoint of trade strategy

Therefore, it is important that to always judge which is better between trend follow or counter trend based on market condition. You should not always entry on both Regular divergence and Hidden divergence.

↑ This is the most important part of this article!
From my personal point of view, I think normally using Hidden divergence (buy on dips or sell on rally as trend follow style) is much easier than using Regular divergence.

Although divergence can be used for oscillator-based indicators other than RSI, the history of divergence begins with the “RSI”, which is a representative of oscillators.

The RSI was invented by J.W. Wilder in 1978, and Wilder advocated “divergence” in which price movements and RSI movements deviate from each other.

After that, Andrew Cardwell, who researched RSI, added a new interpretation of RSI, and in addition to Regular divergence, there is “Reversal (Hidden divergence)”, and he proposed that there are two types of reversal: “Positive reversal” and “Negative reversal”.

Some people call divergence “Divergency”. Both are nouns with the same meaning. The adjective of both Divergence and Divergency is “Divergent”.

There is a word with a similar sound, “Diversity” (many different types of things or people). The word is the more common business word. The adjective for “Diversity” is “Diverse.”

The Famir pattern is a counter trend pattern to use when the ZLR pattern fails, in other words, when the trend changes as it is without returning to the original trend. The Vegas pattern and the Ghost pattern are the same, in the sense that they aim for a small pullback (dip and rally) before the trend approaches the end and finally reverse.

TradingView provides a unique scripting language called "Pine Script". This allows users to create their own original indicators (custom indicators) for analysis and trading as strategy. We introduce the first sample of custom indicator (MACD) created by Pine Script.

Best forex indicators: CCI (2) How to Utilize Divergence of CCI

CCI is one of the most powerful indicators. Because it's super quick and reacts quicker than other oscillators. Divergence of CCI occurs faster than one of RSI. Also, CCI responds sensitively.
Sponsored links
Woodies CCI – Strategy Analysis (6) FFE, TLB, and HTLB trade pattern (counter trend)
Divergence Trade Strategy (2) How to avoid fake of divergence
Home
Resources