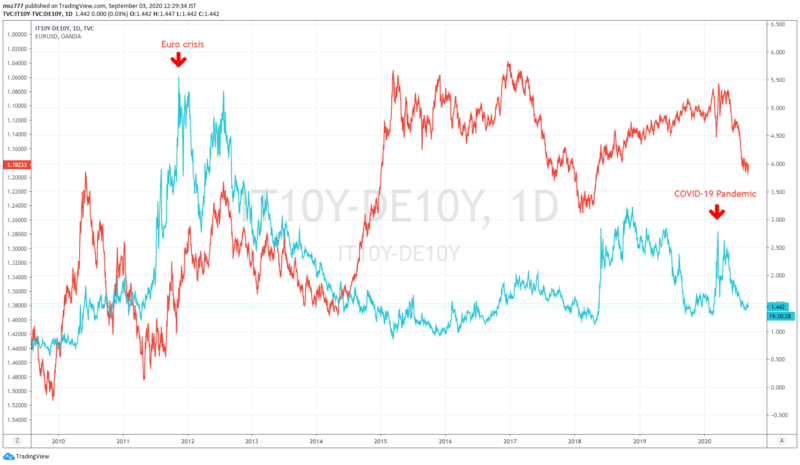 The chart above is a long-term comparison of 10-year government bond yield spread between Germany and Italy and the EURUSD (upside down) over the decade since 2010.
The blue line is the yield spread between German and Italian 10-year government bonds (the scale is on the right), and the red line is the EURUSD (but upside down; the scale is on the left.).

The euro crisis is a debt crisis that began in 2010-2011 and was linked to a financial crisis in Greece by a chain crisis from Southern Europe to other European countries.

As you can see from the 10-year long-term chart above, there is a strong correlation between the German-Italy bond yield spread and EURUSD (the opposite correlation). The ECB’s strengthening of monetary easing was a major turning point in May 2014, and the Eurodollar has fallen sharply thereafter. (The chart above is inverted, so it goes up)

Due to the situation in Italy, where the spread of the new COVID-19 has become more serious, the yield spread on 10-year government bonds between the two countries widened to a maximum of 2.8% on March 17, 2020. But since then, the bond yield spread has subsided and EURUSD has soared.

Looking at the long-term chart, it seems that EURUSD still has room to rise.

Divergence Trade Strategy (3) Why we delay being aware of occurrence of divergence?

If we judge the scenario was wrong after entry, we have to make loss cut as suitable level. Normally the loss cut line where the price exceeds previous high or fall below previous low. If price exceed previous high or fall below previous low, it is highly likely that the divergence itself has been denied, that is, the scenario that we drew has been denied. Therefore, it does not make sense to hold the positions anymore.