TradingView provides a unique scripting language called “Pine Script“. This allows users to create their own original indicators (custom indicators) for analysis and trading as strategy.

Compared to other computer languages, it is much easier to operate, so I would like you to make your own indicator and use it for trading.

Here’s how to create and display your own indicator with Pine Script.

1. From the menu at the bottom of the chart in TtradingView, click “Pine Editor”.

2. The Pine Editor, which is work area for entering scripts, is displayed as shown below.

3. Enter the script.
The script below is from the TradingView User Manual and is a sample MACD indicator. (The content of the script will be explained later in this article.

4. Click “Add to Chart” at the top right of the script entry area.

5. The MACD indicator is displayed as shown below. 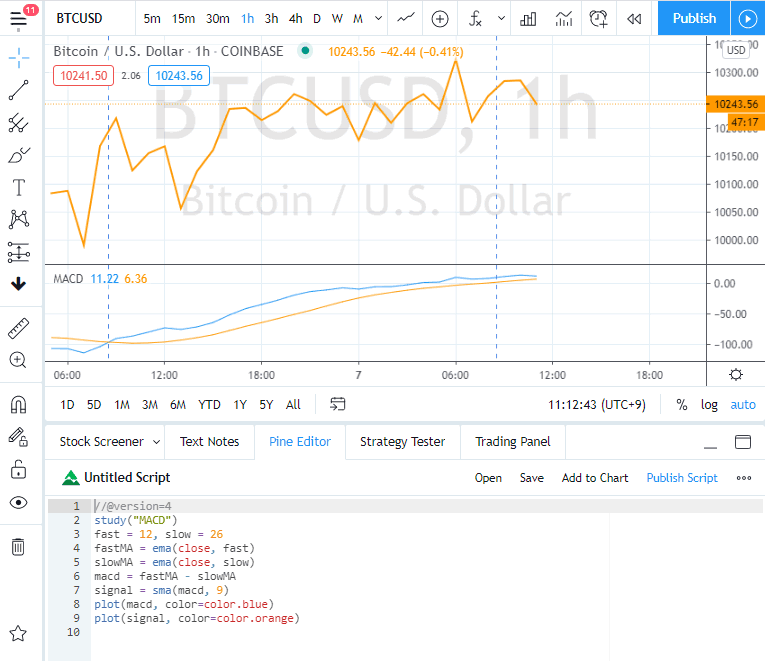 The contents of the MACD sample script used in the above figure are as follows.

//@version=4
The comment tells the compiler that the script should use current version of Pine Script (= version 4).
(It can be always the same input.)

fastMA = ema(close, fast)
The “ema” function is a function that returns EMA (Exponential Smoothing Moving Average). The closing price (close) and period (variable fast = 12) are set as arguments.
Define variable called fastMA to set the value of the function ema.

macd = fastMA – slowMA
Define variable called macd and set the value obtained by subtracting the variable slowMA from the above variable fastMA.

signal = sma(macd, 9)
The “sma” function is a function that returns SMA (Simple Moving Average). The closing price (close) and period 9 are set as arguments. Define a variable called signal to set the value of the function sma.

plot(macd, color=color.blue)
The “plot” function is a function that draws an indicator. As arguments, the variable to be drawn (macd) and the line color (blue) are set.

plot(signal, color=color.orange)
Draw the signal in the same way as drawing the macd above.

The magnet mode of TradingView is a function that to snap the "drawing anchors" of various drawing tools (including trend lines and horizontal lines) to the closest OHLC (open, high, low, and close prices) of the nearby bars. Magnet Mode is most effective when drawing Fibonacci such as Fibonacci retracement. This is especially important for long time-frame charts such as daily charts.
Sponsored links
Trade Idea (RSI, Woodies CCI, Divergence, GMMA, Fibonacci, Pivot) 2020-09-24
Guide of How to Create Custom Indicator by Pine Script (TradingView) 2. plot function
Home
Resources