What is ZLR trade pattern?

The first pattern is called “ZLR pattern (Zero Line Reject)”.
The ZLR pattern is a strategy to focus on the timing in which the CCI line temporarily returns to the zero line direction opposite to the trend, or after crossing the zero line, to return to the original trend direction.

“Reject” means rebounding near the zero line and returning to the original trend.

Below is an example chart of the ZLR pattern in uptrend. 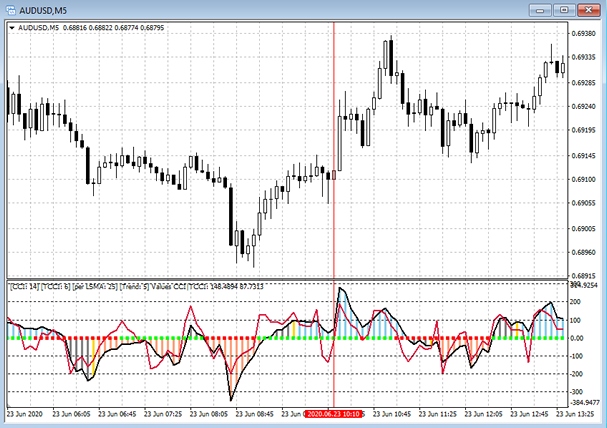 After the bar color turns blue and an uptrend is established, the TCCI and CCI lines can be seen moving back towards zero line.
The entry point is when CCI rebounds (at the red vertical line). You can see that TCCI fall below the zero line and rebounds after exceeding minus 100, after that, CC rebounds.

I would like you to compare the price chart and CCI. This is the point of “buy on dips” in the middle of the trend. It is an easy-to-understand strategy, as the first introduced pattern.

As I’ll explain in a later article, the ZLR pattern is not only used alone, but also with other pattens.

I would like to introduce another example of uptrend ZLR pattern.

In above example chart, the red vertical line means the entry point.
In this case, not only the TCCI line but also the CCI line once fell below 0 and then returned to the uptrend. This also shows clear “buy on dips“.

Next, I will show the case of downtrend (“sell on rally“). The red vertical line is the entry point. 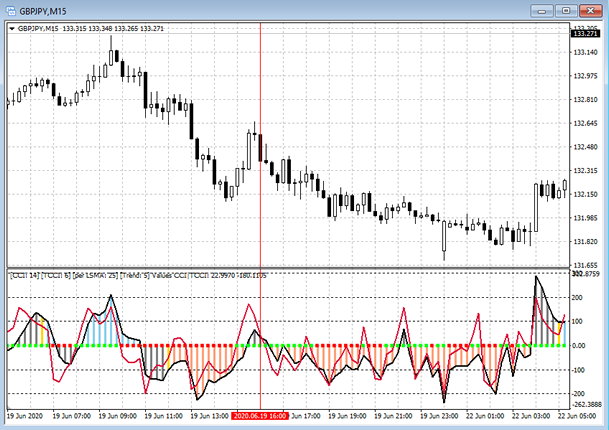 By the way, many forex traders already know that this kind of beautiful trends in the above chart doesn’t occur very often. Therefore, you might think that the ZLR pattern is rather useless. Actually, in the Woodies CCI pattern, there is also a pattern called “Famir pattern” that is used when this ZLR pattern fails, in other words, when the trend changes as it is without returning to the original direction. I will introduce the Famia pattern in later article.
The greatest advantage of CCI is that it is extremely sensitive. On the other hand, the weakness is that there is a lot of deception (though it is the front and back of the coin). Therefore, the point when using CCI is “how to avoid deception.”

According to the official reference, it is possible to enter 20 seconds before the bar is confirmed, without waiting for the bar to be confirmed.
I’ll explain the timing of exiting in later article.

There is a strong correlation between the German-Italy bond yield spread and EURUSD (the opposite correlation). In long-term 10 years chart, ECB's strengthening of monetary easing was a major turning point in May 2014, and the Eurodollar has fallen sharply thereafter. Also, we compare Euro crisis in 2011 and COVID-19 shock in 2020.